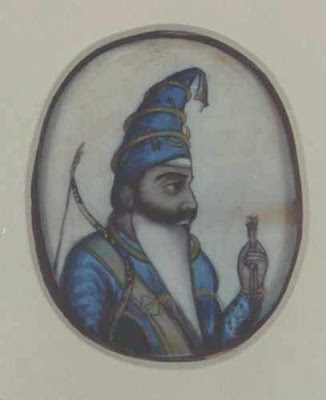 Maharaja Ranjit Singh talking to the British about the martyrdom of Akali Phoola Singh Ji:
' He fought on foot, was wounded and returned to battle on horse. He was wounded again, then sat on an Elephant. Here he was shot through the lung. He was a brave man, but a villian, he had not fallen I would have imprisoned him, or he would have set fire to your British camps.'
Portrait of Akali Phoola Singh on ivory
A British witness writes:
Vahiguroo Ji that battle cry, is bearing onward still, The wild Akalis onward rush, they struggle up the hill.
Its Phoola Singh who heads the band, but sure I saw him fall, When first he led his heroes on, struck by a musket-ball: Now mounted on an elephant, he leads them on again, But much I fear, five hundred men, will waste their lives in vain.
'Come on Sikhs! Come on once more,' cried out the brave Jathedar Come follow me, and we will change, the fortune of the war.' 'Vahiguroo Ji Ka Khalsa Vahiguroo Ji Ki Fateh' he cried; But not a Khalsa soldier still, to that wild cheer replied.
Their silence, nor their trembling looks, did that fierce chief dismay, But boldy with his gallant band, he rushed into the fray: The Afghans nothing loth came down, the fight grew fiercer still, Yet onward press the gallant few, for that contested hill.
Like hailstones rained the leaden storm, around, above, below, But yet the dauntless lessening band, press onward on the foe. Their leader on his elephant, still forward led the way, His was the guiding spirit still, above the bloody fray.
He watched his time, then gave the word, each man released his steed, adrove him through the Muslim ranks, with fury-winged speed,
Their matchlocks on the ground they threw, and drew the fierce Talvar
, And higher up that bloody hill, they bore the tide of war.
Again the Khalsa troops advance, remembering former fame; They burn to wash in Afghan blood, the morning's marks of shame.
The British administration records:
Phula Singh had, as an Akali (a Sikh ascetic class), great influence with his countrymen. The Maharaja tried for years, with half sincerity to capture him, and the English drove him from place to place, but could never seize him. At this very time, when Partab Singh joined him at Makhowal, the Maharaja had sent the most positive orders for the Philor troops to drive him out of his territories. The garrison was accordingly marched against him, but when they approached, Phula Singh sent to ask them if they would kill their Guru (spiritual teacher.). The Sikhs would not molest him ; and the whole force was kept out some two months to prevent his plundering, marching where he marched, more like a guard of honour than anything else. Numberless stories of the same kind can be told of Phula Singh, who was a very remarkable man. He was a robber and an outlaw, but he was nevertheless a splendid soldier, and a brave, enthusiastic man. He made friends with Ranjit Singh later, and won for him the great battle of Teri, in which he was killed, in 1823.
Posted by Nihang Singh and others at 07:42