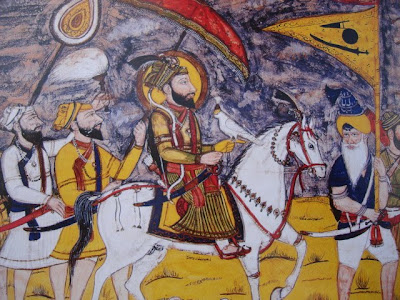 Besides the regular confederacies, with their moderate degree of subordination, there was a body of men who threw off all subjection to earthly governors, and who peculiarly represented the religious element of Sikhism. These were the " Akalees," the immortals, or rather the soldiers of God, who, with their blue dress and bracelets of steel, claimed for themselves a direct institution by Govind Singh. The Gooroo had called upon men to sacrifice every thing for their faith, to leave their homes and to follow the profession of arms; but he and all his predecessors had likewise denounced the inert asceticism of the Hindoo sects, and thus the fanatical feeling of a Sikh took a destructive turn. The Akalees formed themselves in their struggle to reconcile warlike activity with the relinquishment of the world. The meek and humble were satisfied with the assiduous performance of menial offices in temples, but the fierce enthusiasm of others prompted them to act from time to time as the armed guardians of Amritsir, or suddenly to go where blind impulse might lead them, and to win their daily bread, even single-handed, at the point of the sword.* They also took upon themselves something of the authority of censors, and, although no leader appears to have fallen by their hands for defection to the Khalsa, they inspired awe as well as respect, and would sometimes plunder those who had offended them or had injured the commonwealth. The passions of the Akalees had full play until Runjeet Singh became supreme, and it cost that able and resolute chief much time and trouble, at once to suppress them, and to preserve his own reputation with the people.
Posted by Nihang Singh and others at 13:28