On the RUN!!! An Akali Nihang Singh Khalsa 19th century 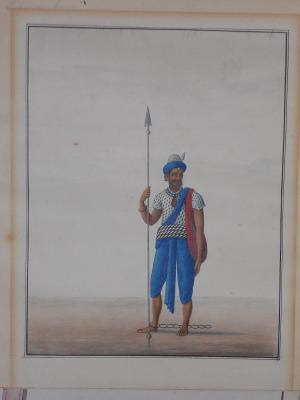 An Akali who looks like he escaped the British invasion, look at the shackles on his foot. This needs further investigation. Company School watercolour of a Sikh Warrior. Circa 19th Century. An unusual depiction of a Sikh warrior on his right arm he wears a religious Sikh bangle known as a Kara and holds a spear whilst a dagger is placed inside his turban his dress is very similar to the Akali sect of the Sikhs.