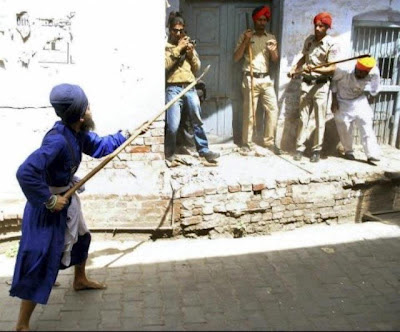 Babe ki Fauj versus Babbar ki Fauj
Balwant Singh Rajoana, in a statement issued from Central Jail, Patiala, on Wednesday made a scathing attack on Chief Minister Parkash Singh Badal.“Those Sikh youths who sacrificed their lives and happily attained martyrdom for the pride and prestige of (Sikh) community were labelled as misled youths and terrorists. And those national leaders who bowed before the murderers and cruel were given Fakhr-E-Quam awards,” Rajoana said, addressing the Khalsa Panth in his statement after justifying “picking of weapons” by the Sikh youth (during militancy in Punjab) following “demolition of Akal Takht by tanks and cannons from Delhi”.
Posted by Nihang Singh and others at 06:20