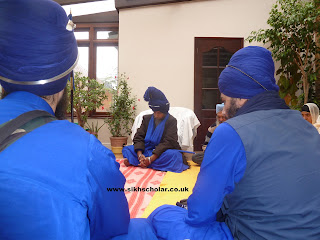 Sahib Singh Baba Joginder Singh the acting head of the Baba Buddha Dal has been in the UK visiting the sangat. He presided over Amrit Sanchar in London over the weekend and many Sikhs became Khalsa. 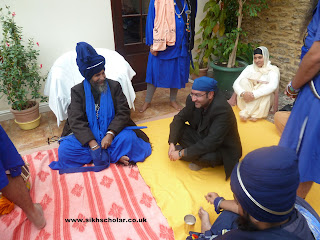 I asked Baba Ji several questions related to the Dasam Patshah ka Granth (Sri Dasam Granth Sahib), Baba Ji was graceful in answering them. He explained the importance of Dasam Bani and how both Granths were in prakāsh in Gurdwaras before the coming of the SGPC. He also spoke on Sri Sarbloh Granth (Granth of All-steel) and how this was an extension of the Sikh scriptures. He also explained about the days when Sri Dasam Granth was at Sri Akal Takht Sahib.

Baba ji explained how Sikh history had been distorted over the many centuries and how the British changed the way Sikhs not only perceived themselves but how they would be seen in the future. He gave rare anecdotes on how Akali Baba Hanuman Singh (Akal Takht Jathedar during the Anglo-Sikh wars) was betrayed by other Sikhs and killed by the British. 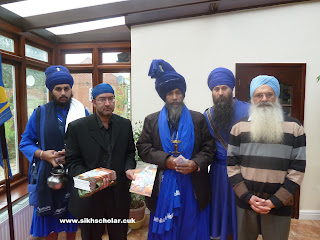 I presented copies of my book, Sri Dasam Granth Sahib: Questions and Answers to Baba Ji. He was pleased that I had undertaken research on the Tenth Guru's bani and advised me to continue this mission.

I was absolutely awestruck and surprised with the amount of knowledge and wisdom that Baba Ji possessed. The sangat in attendance were blessed with a true mahapurkh. His final message was that many people had come to finish off the Sikhs but with the knowledge of the Sikh scriptures, they had seen through many adversities. The final days of the Khalsa would never come and in instead Baba Ji painted a picture of a utopian society of the Khalsa.
Posted by Nihang Singh and others at 16:08