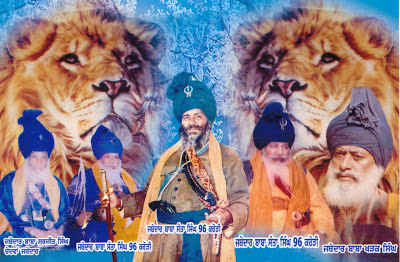 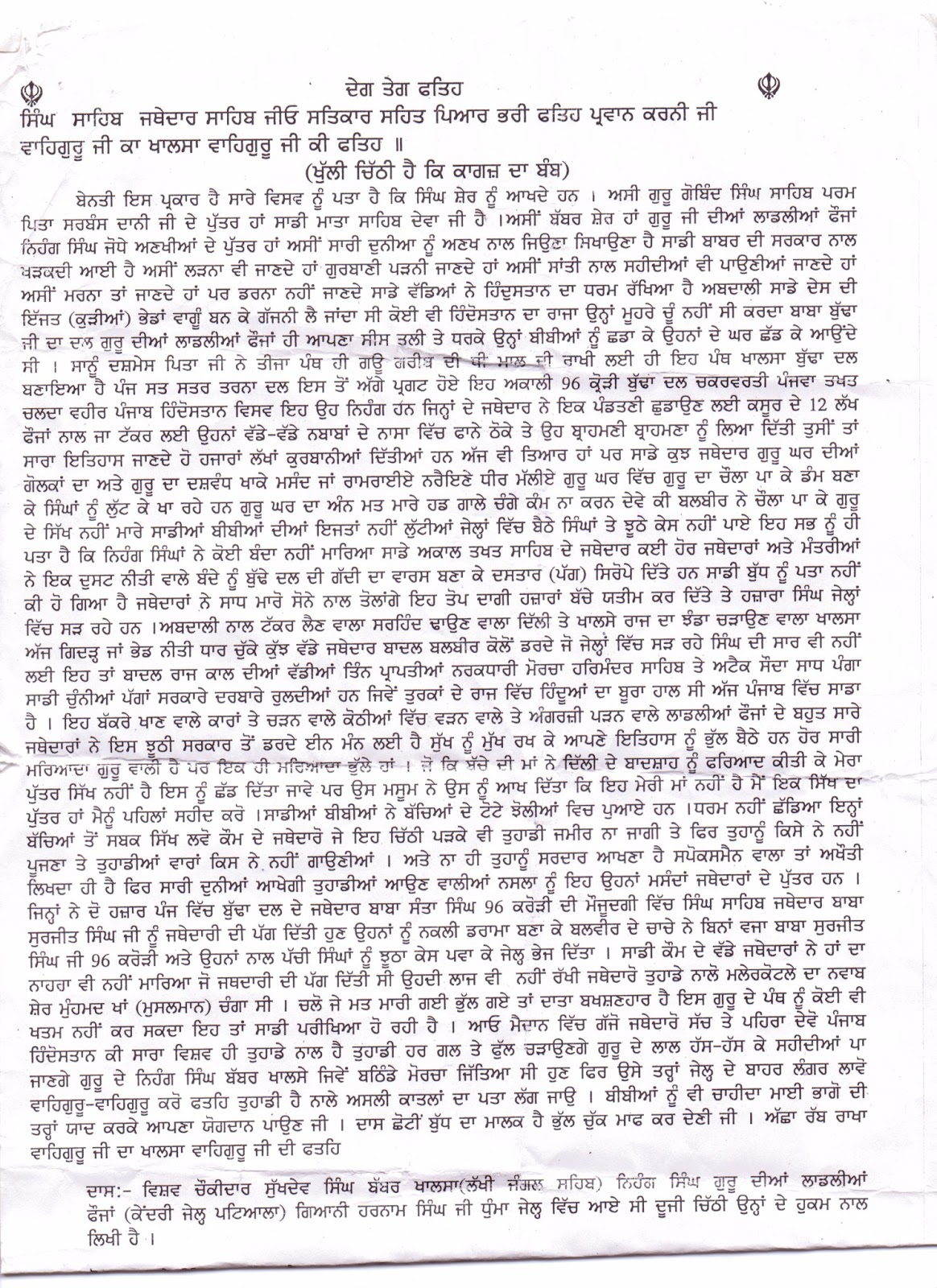 Degh Tegh Fateh! Dear General, Leader of the Singhs, with great respect please answer to the Fateh: Vahiguru ji ka Khalsa Vahiguru ji ki fateh! (This is an open letter that is like a bomb). The plea to you is this, that the whole world knows that the Singhs are like lions. We are the sons of Guru Gobind Singh who sacrificed his whole family, and our Mother is Mata Sahib Kaur. We are fearless Lions who are the beloved Nihang army of the Guru, we are his sons, we teach the whole world how to live with dignity, in peace we sacrifice our lives, we know how to die, but we don't know how to fear. Our elders protected the dharam in India. Abdali came to dishonour the women of this land, and herded them like sheep, and took them to Gazni (Afghanistan). Not one King from India stood in front of him to stop him. However the army of Baba Buddha (Buddha Dal), the beloved army of the Guru put their heads on the palm of their hands, fought and released those ladies, and took each one to her own home. The Guru made the Third Panth (Khalsa) to protect the cow and the poor (the defenceless), this is why the Buddha Dal was made, and sometime later the Tarana Dal came out of this army. Thus the 96 crori Buddha Dal Chakarvari Panjva Takht Chalda Vahir Punjab India World, are those Nihang Singhs whose leader, for the sake of freeing on Pandit lady from imprisonment, sent 12 hundred thousand men to Kasur. In the conflict that ensued the Leaders of the enemy had their noses bloodied, and brought the Brahmin lady back to the Brahmins. You all know this history. We made innumerable sacrifices, and we are ready to make the same today. However some of our leaders have taken the keys of the Golaks and are eating up the finances, and as impostors are setting themselves up in the house of the Guru, by dressing like Sikhs. Is it not true that our women have been raped, that we are in jail on false charges? Everyone knows this, that  the Nihang Singhs have not murdered anyone. The acting leader of the Akal Takht Sahib, leaders, and other officials have given a man who is like a gangster the authority over Buddha Dal. They tied  turbans on him and gave him siropas [ to symbolise this]. I do not understand why the Jathedars would want to kill a Saintly being, and give the offender his weight in gold, in this process thousands of children have been effected, and thousands of Singhs are now in jail. That Khalsa who took on Abdali, flattened Sirhind, conquered Delhi, is now afraid of Badal and Balbir. They have not even offered help to those Singhs who are wasting away in jail. In this rule of Badal who supports Narakdharis, Sucha Sauda, and attacks on Harminder Sahib, the state of Sikhs in Punjab is like those of Hindus in Moghul times. Our leaders are now afraid of these colonial monsters, who read English, drive cars, and live in mansions. Many of our leaders are afraid of this false government. They have forgotten their own history.  They have forgotten the Guru's maryada but one in particular. That when the mother stated to the Emperor of Delhi my son is not a Sikh, and let him go free, but the boy then spoke and said this women is not my mother, and chose to be a martyr first. Our  ladies also saw their own children cut and put into garlands around their necks. They did not leave the Dharma, learn from these children oh leaders, if you do not feel anything after reading this letter, then you will be one of those people who will never be remembered or sung about [like the shahids are]. Your are not worthy of being called a Sardar, people will recount that your children and theirs, were the offspring of traitors. The 96 Crori Jathedar Baba Santa Singh, gave the leadership to Baba Surjit Singh while he was alive in 2005, but now they make a farce, the uncle of Balbir has without cause  made false cases against Baba Surjit Singh and another 25 Singhs. The great leaders of our Panth have not even spoken about this, and kept the honour of the turban of leadership passed to Baba Surjit Singh by Baba Santa Singh. Oh Jathedars the Nawab of Malerkotla was much better than you, who was of the Islamic faith. If I have said anything wrong may God forgive me, but nobody can destroy this Panth, but this has to be tested, as it is on us. Come and join us in battle Oh Jathedars, and join the battalion of truth, the whole of Punjab, India, the world will salute your honesty. Garlands of flowers will be placed around your necks, oh beloveds of the Guru we will laugh and embrace martyrdom. As the fearless lion Nihang Singhs won the battle at Bhatinda, so begin to prepare the langar outside this jail. Say Vahiguru Vahiguru the victory is yours, and you will know the reality. Ladies you also need to embrace this way like Mai Bhago, and was thus be made immortal. I am just a mere servant with a small mind, so please forgive me. Ok, may God protect you, Vahiguru ji ka Khalsa Vahiguru ji ki fateh! By Sukhdev Singh Babbar Khalsa - Patiala Jail, 1/2013

Posted by Nihang Singh and others at 07:32