The devotion of Bhagat Sain Ji 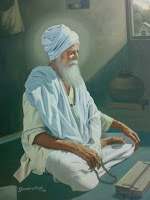 The Bhagat Mal contains a legend which at once illustrates Sain’s devotion to saints and the estimation in which he was held for his piety. When going one day to perform his usual ministrations for King Raja Ram, he met some holy men on the way. He thought it was his first duty to attend to them, He took them with him, and began to render them with the customary services. With the greatest mental satisfaction to himself he gave them consecrated and secular food to relieve their souls and bodies. In thus acting Sain disregarded his duty to the king and braved his displeasure. The legend states that a holy man, by God’s favour, in order to avert the king’s wrath and save Sain from punishment, assumed his appearance, and having gone and performed the customary duties for the king, took his departure. Soon after Sain arrived and began to apologise for the delay. The king said, “Thou hast only just gone after the usual services to me; why apologise?” Sain replied, “ I have not been here. Perhaps thy majesty sayest so to excuse my absence.” The Raja then knew that a special providence had intervened and performed for him the usual tonsorial duties. He was at once converted, fell at Sain’s feet, worshipped him as his guru, and thus sought an asylum in God. The following hymn of Sain is found in the Guru Granth Sahib, Raag Dhanasari, Sri Sain, p.695 :
Having made an oblation of incense, lamp, and clarified butter,
I go to offer to Thee, O God.
Hail to Thee, O God, hail!
Ever hail to Thee, O Sovereign God!
Thy name is the best lamp, meditation theron the purest wick;
Thou art alone the Bright One, O God.
It is the saints of God who feel divine pleasure;
They describe Thee as all-pervading and the Supreme Joy.
Thou, of fasniating form, O God, float us over the ocean of terror.
Sain saith, worship the Supreme Joy.
(taken from Sikiwiki) (photograph of Bhagat Sain kindly allowed by Sikh Museum Darbar Sahib)
Posted by Nihang Singh and others at 11:03