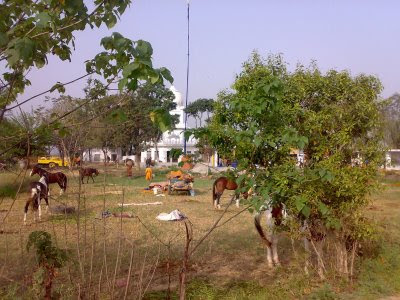 In the vicinity of Anandpur Sahib, is Gurudwara Shahidi Bagh pictured in the images. This Shaheedi Bagh is different to the one opposite the Anandghar fortress next to Keshgarh Sahib. 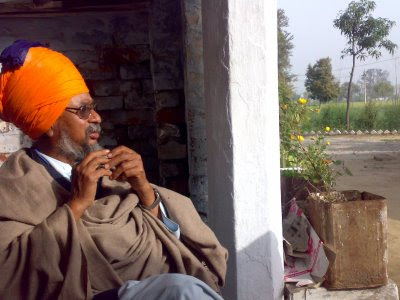 A Farladhari Nihang Singh Khalsa, Akali Baba Tara Singh Ji. The head Mahant of this historical Gurudwara Sahib.
At this holy place, the Gurudwara is built in memory of the Shahid Singhs. The Singhs gave up their lives following the order of their master, Guru Gobind Singh Ji. Guru Ji had ordered the Singhs to stop Jabbar Khan from intercepting the marriage procession and taking the newly wedded wife of Pandit Devi Das. For those of you who have seen brave heart, the Moghuls had the same law of primae noctis, e.g sexual rights of any newly married bride on the first night of marriage. The girls father went to the Guru and asked 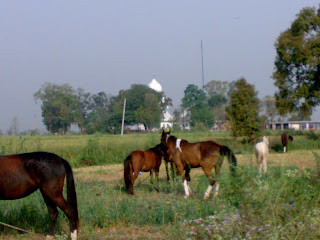 him for his help. The Guru sent the Singhs with Sahibzada Baba Ajit Singh Ji and Akali Baba Deep Singh Ji who guarded the marriage procession. The Moguls attacked and many Singhs gave their heads for righteousness. Jabbar Khan was confronted in battle and slain, as he lay dying he asked for a last request before the Guru, he asked that he may be remembered. The Guru replied you will be remembered as a scoundrel by the Sikhs, and they will strike a memorial stone with their shoes in memory of your evil deeds, at this exact place where you have fallen. Thus Jabbar Khan did not die by being killed by a sword like a true warrior, the final blow that killed him was with a shoe to the head. The girl seeing the inability of the local Hill Princes, and inhabitants to protect their women, went with her husband to live at Anandpur Sahib. There she became a Singhanee and her husband a Singh.
The parkash of Adi Guru Granth Dasam Granth, and a Nishan inside and a view of the Gurudwara from the fields. 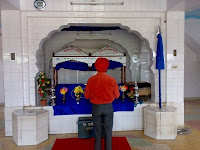 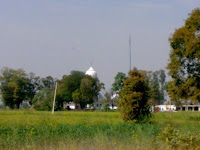 Posted by Nihang Singh and others at 07:06