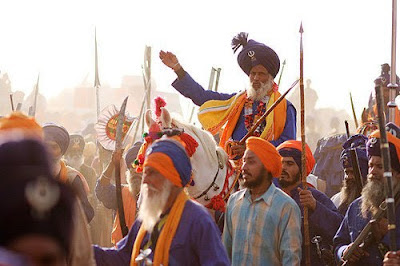 Rattan Singh whose account is based on contemporary oral evidence, was told by a former veteran that one basic tactic of the Sikhs was: “Hit the enemy hard enough to kill, run, turn back and hit him again; run again, hit and run till you exasperate the enemy, and then, melt away.” Their entire theory of war is summed up in the word Dhai Phat or two and a half injuries. They considered approach, and all that goes into the making of it when element of surprise is to be secured, as one secret of success. This they called one Phat or injury and regarded it 40 per cent of their battle activity. The half Phat was the sudden swift shock action which put the enemy off his balance. Then they suddenly withdrew before the enemy could strike back and disappeared to where he could not chase them. They considered speedy and orderly withdrawal to be the second secret of success or the other complete Phat.
By Arjan Das Malik.
Posted by Nihang Singh and others at 06:21