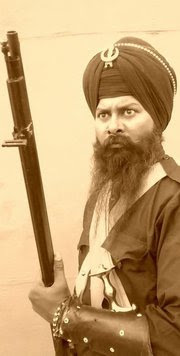 Rattan Singh Bhangu explains to the English enquirer Murray why the Guru decided to transform the Panth in this manner.
Murray then asked me to explain in detail why the Guru had created a [new] Panth. ‘The Muslims ruled an immense empire,’ he said, ‘and their writ ran through its twenty-two provinces. It included islands in the oceans, and extended through the mountains of the south and the east. Everyone was under their control. How could this community of Singhs continue to grow? How could the subjects [of such an empire] raise a rebellion and where was its army? How could the rulers remain unaware of the activities of the Sikhs? Surely they would regard the Guru and his followers with the greatest of hostility? Had they become friendly towards them? Why did they not recognise the Sikhs as a third panth [distinct from both Hindus and Muslims]? Did they have no counselors wise enough to recognise their significance? Had the panth not claimed sovereignty? How could it possibly remain concealed from the authorities?’
Fellow Sikhs, I answered him as follows. ‘From its very birth the [new] Panth was unconcealed. From the very beginning its members were as sharp as thorns. When was the Sikh Panth ever concealed? The Sikhs could never hide themselves! It was a Panth created to fight, its members bearing arms from birth. Its Sikhs are given the baptism of the sword, and the gurhati which they receive is likewise administered with the sword. In their turbans they carry steel quoits and daggers. How can they who sport lions’ claws ever remain concealed? The Supreme Guru created the Panth in order that it should fight! Sovereignty cannot be won without struggle.

Translated by W. H. Mcleod.
Posted by Nihang Singh and others at 06:05