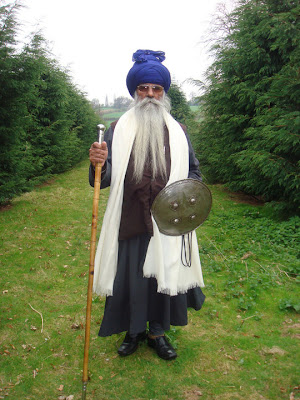 The Nihangs constitute a distinctive order within the Khalsa. Ardent in their loyalty to the Khalsa they regard themselves as an elite corps dedicated to its defence and the advancement of its martial ideals. They first appeared during the eighteenth century as a particularly warlike element within the militant Khalsa of the misl period. Ranjit Singh, recognising their value as a fighting force, incorporated them in his army as a colourful if turbulent brigade of reckless infantry. During the early period of their existence they were known as Akalis.28
The Nihangs are organised as Four ‘armies’ (dal) but share a sense of common discipline and purpose. Most Nihangs are unmarried, their belief being that as soldiers of the Khalsa they must be unencumbered by family ties. For part of the year they remain in their camps (dera) attending to cultivation and cropping. At other times they roam the Punjab on horseback, conspicuously visible in their blue garments and for the range of steel weapons which they carry.
The Nihangs are a sect of Khalsa Sikhs [recognisable by their distinctive appearance]. On their heads they wear a high turban known as a damala, surmounted by a piece of cloth called a pharhara (‘standard’ or ‘flag’.) In their turbans they wear steel quoits, and they carry other weapons such as a cannon-match, two-edged sword, kirpan, etc. Their garments are always blue. Because they have renounced all fear of death Nihangs are always ready to die for their faith. They also renounce worldly concerns, which is what their name, nih -ang, means....
Many Nihangs claim that the practice of wearing the high turban and symbolic pharhara was instituted by Guru Gobind Singh. According to Vivek Singh of Arnritsar, however, it was Baba Naina Singh [a military leader of the mid-eighteenth century] who began it. He did so by attaching his standard to a bearer should be able to lead with the flag while still having his hands free to use his weapons.
Baba Naina Singh’s pupil Akali Phula Singh became a famous general in the Sikh army [of Maharaja Ranjit Singh]. Because they are devotees of Akal [Purakh] and because they observe the devotional discipline of repeating the word ‘Akal’ Nihangs are also known as Akalis.
Nihangs are rigorous in their observance of the Rahit. They live austere lives, distinguished by their love for the scriptures, their fearless acceptance of God’s will, and their generosity of spirit. During the time of the twelve misls and subsequently in the reign of Maharaja Ranjit Singh they rendered notable service as defenders of the Panth and as exemplars of its discipline. If the Nihangs would give up cannabis and opium, and if they could be persuaded to develop an interest in education, their services to the Panth would be of enormous value.
Translated from a description by Bhai Kahn Singh Nabha
Posted by Nihang Singh and others at 06:00